The state and regional chapters of NUCA are involved in many areas on behalf of their members. They provide many benefits and services, local events, networking opportunities, workforce development, and advocacy for favorable laws and regulations impacting the industry.

The chapter held its quarterly Safety and Risk Management meeting in Raleigh, N. Carolina in February, with United Rentals Trench Safety serving as their generous host.  The meeting's guest speaker was Jay Wilkerson, of Conner Gwyn Schenck PLLC, who spoke on the ramifications of a trench collapse. Over 40 attended this popular chapter event.

The Carolina's annual Spring Conference is April 23-25th at the Wild Dunes Resort, Isle of Palms, S. Carolina. The chapter is looking forward to having NUCA CEO Doug Carlson and COO Chris Barrett in attendance!  Registration for the conference is open and available at www.nucacarolinas.org.

The chapter held on March 11 its monthly meeting of safety professionals. This month's topic was Temporary and Young Workers. The chapter also holds a captivating monthly Safety Program on a current hot topic, with this month's safety lunch scheduled (on March 20) to discuss "Rigging Inspection and Rejection Criteria." There is more information about these events on the chapter's website, www.nucacolorado.com. 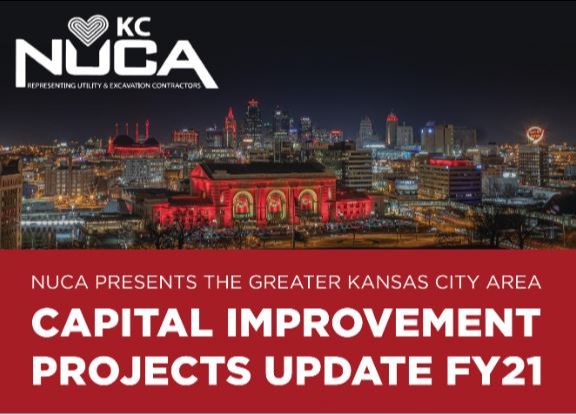 The Kansas City chapter is postponing their Greater Kansas City Area FY21 Capital Improvement Projects Update, to be hosted by the chapter at 1414 Genessee St., KCMO.

April 7th was the registration deadline, but the chapter postponed the event to a later date because of the coronavirus national emergency.

Chapter Executive Director Evan Piscitelli was invited to provide testimony before the N.J. State Senate on the Water Quality Accountability Act of 2017. Evan's testimony to the state lawmakers highlighted the need to upgrade the state's water infrastructure and to build upon this law. Read more here.

NUCA's Suncoast Utility Contractors Association (SUCA) chapter is holding its Sawyer Memorial Scholarship spring golf tournament on April 3. The annual event will be held at the Club Renaissance in Sun City Center, FL. Registration opens at 7:00am with breakfast and a shotgun start at 8:00am. Lunch and awards immediately after. Information about registration and sponsorships can be found via this link.

NUCA of Florida's Legislative Days will be held in the state capital of Tallahasee on Feb. 17-18. The event's headquarters will be the Aloft Hotel on 200 N. Monroe St. You can find more information about the two days of assocation and legislative meetings via this link.

In the Chapter's latest From the Trenches newsletter, the final page's "NUCA of Iowa Impact" report listed some important industry statistics for the state:

State-wide aggregate statistical lists like this can be very useful when presenting the industry's strength to both state and Federal legislatures. 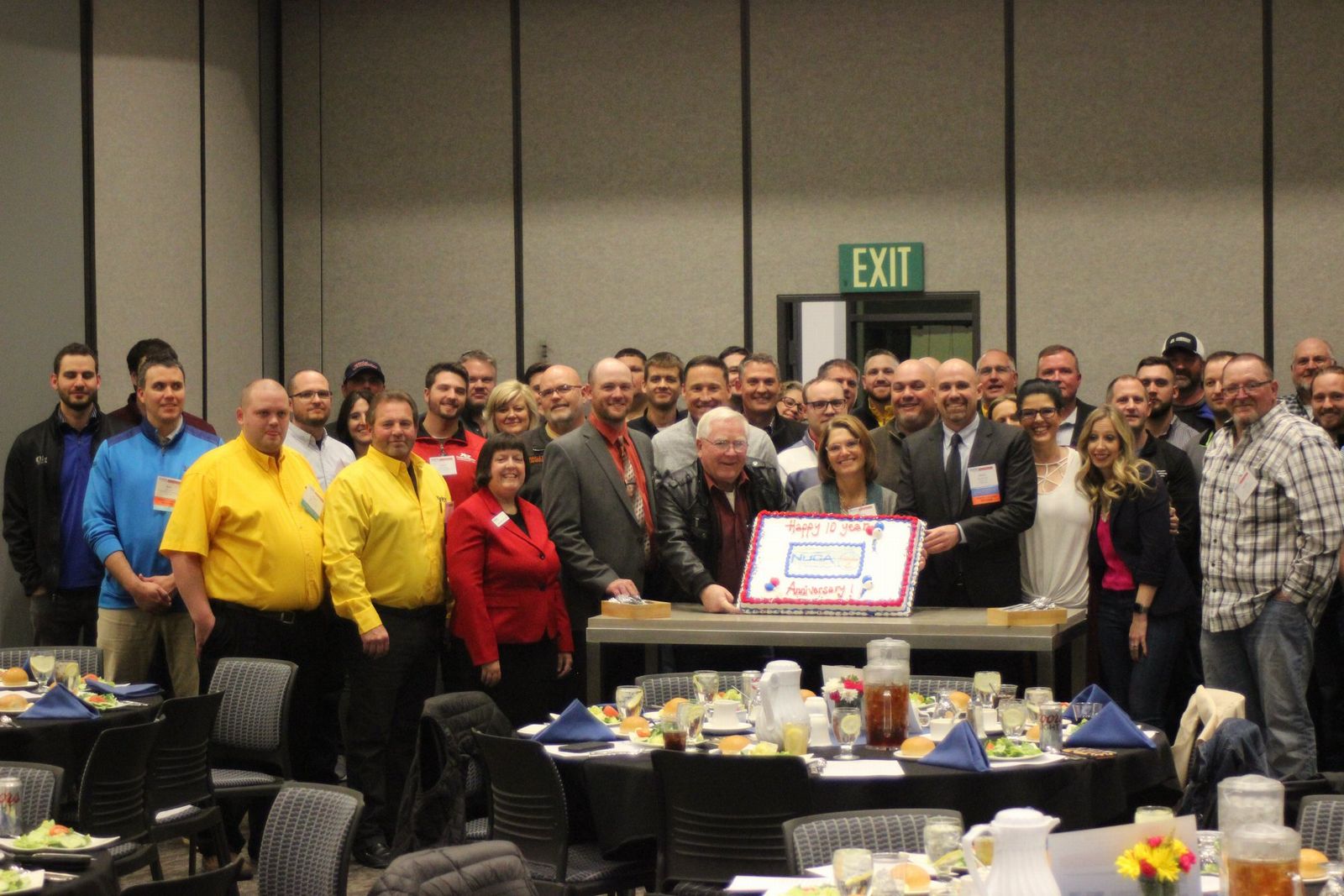 The association celebrated its 10th anniversary this year at its Annual Conference in Omaha (right), on Feb. 7. There were a slew of educational sessions held, including employee drug testing issues, contract clauses, preserving rights through liens, and OSHA jobsite inspection details. The convention also featured eight engineering firms and municipalities seeking contractor information about upcoming bids, and 18 exhibitors demonstrated their latest technology, products, services, and equipment.

Members also had fun at the Chapter's team building event and closing reception, where numerous awards were presented, including Chapter scholarship winners.

The Carolinas's latest The Pipeline chapter newsletter reported that their Board of Directors meeting and Clay Shoot held on Jan. 17 at Drake Landing in Fuquay Varina, NC, turned out to be a great event. Participants were provided with a full round of sporting clays, shotgun shells, lunch, water, sodas, and an event t-shirt. The event's sponsors helped with donations for the Chapter's raffle, reported Chapter president John Barringer of B.R.S. Inc.

NUCA of Metropolitan Washington, D.C. Executive Director Debora Harvey presented testimony on behalf on NUCA members to the D.C. City Council on October 30. She spoke about proposed legislation related to the city's Dept. of Employment Services Workforce Development Programs and the programs at the D.C. Infrastructure Academy.

Debora's testimony pointed out that our industry is in constant need of new workers who are able and willing to accept the challenges of working in a tough, yet rewarding industry. Work in the utility contracting arena may not be the easiest work, but it offers a chance to make a good living. NUCA has requested that the D.C. Council continue to support and seek expanded funding for the city's Infrastructure Academy to expand training courses and post-employment support for both employers and employees.

At the Chapter's Jan. 23rd Board meeting at Maggiano's, the members welcomed Wesley Cook of Florida Roads Contracting, Rick Parker of Standard Precast and Barry Watson of Fortiline Waterworks to their Board of Directors.

From the proceeds of our very successful Dozer Days in October, our chapter was able to present in November 2019 to Operation Breakthrough a sizeable donation to help their charity. Operation Breakthrough is a local Kansas City organization which provides a safe, loving and educational environment for children in poverty and empowers their families through advocacy, emergency aid and education. NUCA KC presented this worthy organization a check for $10,000.

The 2020 NUCA Hawaii Legislative Walk took place on January 15, starting early at 9:00 a.m. at the State Capitol building in Honolulu. The NUCA members who attended met with their federal Congressional delegation and staffs.

Seamark Ranch’s vision is to break the generational cycle of failure that affects the families they serve, and to nurture purposeful living in children who have experienced the impact of broken families.

Members of the chapter's Executive Committee presented Seamark’s executive director Fred Meiners with a check for $10,800.

The Chapter is watching several pieces of legislation in the state legislature that could affect their membership. These issues include an extension of a business incentives program that expired in Dec. 2019, where to direct the state's $266 million budget surplus, and property tax relief. NUCA of Nebraska is holding its Networking Reception with State Senators on Feb. 20 at 5:30pm; registration for members can be found on the Chapter's website at nucanebraska.com.

The Chapter will be holding its first meeting of the year on Feb. 20 at Miller's Ale House in Town Square Las Vegas, starting at 4pm.

The chapter on Jan. 17 held its NUCA Family Night at the Rodeo and Annual Meeting at the new Dickies Arena in Fort Worth, Texas. Thanks to the Chapter's generous sponsors, the event also featured a delicious dinner and the inauguration of their new Chapter Board of Directors members. It was quite a turnout, as the pictures show.

Our NUCA chapter held our Fall Conference in October at the historic Homestead resort in Virginia. We welcomed John Barringer as our chapter's incoming president. NUCA Chairman Dan Buckley and NUCA Government Relations principal Eben Wyman, as well as Steve Brown, State Utility Contractors, Paul McCain of McCain Special Project Servies, and Stan Phelps, the "Purple Goldfish", spoke to the attendees. The 2019 Ditch Digger of the Year award was given to Wes Sells, of B.R.S., Inc. Associate of the Year was won by James River Equipment.

UCAC members are invited to an evening tour of the Indeco North America (INA) manufacturing facility in Milford, Conn., on Jan. 27, 2020. For over two decades, Connecticut-based INA has been a leading manufacturer of heavy-duty hydraulic breakers, mulching heads, steel shears, compactors, pulverizers and pedestal booms for demanding demolition, scrap, recycling, mining and road construction applications. Members can attend this free event in a casual atmosphere to learn more about UCAC and Indeco with cocktails, dinner, and door prizes. For more information or registration, visit ucac.pro.

On Nov. 5 the North Florida chapter held their 8th Annual NUCA Sporting Clay Challenge. We had a great turn out, with all who attended having a great time. Cecil Powell brought home the first place this year, followed up with TB Landmark in second and Pro-line in third. We would like to thank all that attended and all of our sponsors.

The chapter has been going through a lengthy discussion with the City of St. Petersburg, Florida. SUCA was addressing with the city and our industry the institution of a mandatory apprenticeship program for all large contracts. This was problematic to our industry due to the fact that there is not a program for underground utility contractors at this time. After many meetings with the city council and attending council board meetings SUCA was able to convince the city that FDOT on-the-job training will be adequate to satisfy their requirement. SUCA has won a victory as throught their work because the city adopted this training as acceptable.

Under beautiful weather, the NUCA of Iowa Competition Shooting event took place Sept. 26 at the Big Springs range in Searsboro. 10 different shoot-ing stations were set up to challenge the shooters. The 120 shooters from 30 teams kicked off the event after lunch was served by Contractor Solutions. The 10 stations included 4 trap stations, and then different shooting platforms, types of firearms and varied distances and targets. A full-auto station was a new feature for this year’s event, and greatly enjoyed by all.

This event would not have been possible without the support of our sponsors. With all the sponsorships, we were able to have gun door prizes with many of the guns we used at the event. That included two Henry rifles that were engraved with the NUCA logo.

The chapter presented its first-ever NUCA Middle Tennessee Ditchdigger of the Year Award at its December holiday party. Founded this February, the new chapter was able to recognize all 40 founding members who played an enormous role in starting their chapter. 2020 promises to be another year of growth, as their members and leadership will be working with TN 811 on some changes to the Tennessee Underground Damage Prevention Act.At the event, the chapter also heard from NUCA National Chairman of the Board, Dan Buckley. He spoke about how important NUCA chapters are to the success of NUCA as an association and how much strength in numbers there is with NUCA as a whole.